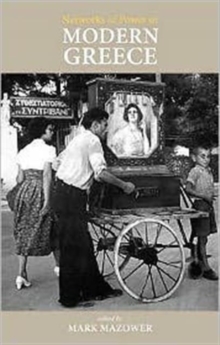 "Networks of Power in Modern Greece" is a multi-disciplinary collection of essays by some leading scholars of the country that provides exciting new perspectives on modern Greek society and its historical development.

Helen Angelomatis draws our attention to the role of women in the Greek war of independence, Mark Mazower and Charles Stewart explore local arguments over the miraculous power of the Virgin Mary to shed new light on the role of religion in the early 19th century; Thanos Veremis analyses the populist radicalism of Andreas Papandreou, the man who dominated Greek politics in the Cold War's final decades, while the ambiguities of the very idea of a 'modern Greece' are highlighted by John Koliopoulos.Other chapters examine through an ethnographic lens various aspects of contemporary Greek society. Together, these essays by historians and anthropologists in honour of John Campbell challenge conventional ideas of Greek nationalism and social development and illuminate much broader issues - of the way nation-states emerged from empire, of the relationship between family and ideological conflict, of the continued relevance of religious meanings to modern daily life - that remain fundamental to any understanding of contemporary Europe.