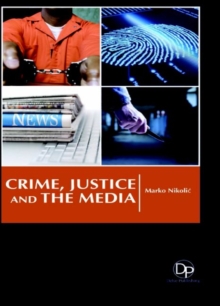 Crime, Justice and the Media Hardback

We begin our book with analyses of aspects of the relationship between the courts, on the one hand, and the government, the legal profession, universities, the media and civil society, on the other hand.

Media can in many ways be helpful to the legal system.

Certainly, invasion of privacy, sensationalism, tendentious reporting and declaring people guilty or innocent in advance does not belong here.

Irresponsible behavior is not acceptable in the era of global/mass media and social networks.

Especially not if only goal to increase the circulation and the number of web page visits. Another important aspect of the connection between justice and media is the influence of the content in the media, especially to younger viewers / readers.

Mass shootings committed by adolescents in the US always have global media coverage and are a good basis for a debate about the extent to which the media are in the cause of the problem.

Follows the story about how the terrorist groups accepted social Medias and global trends and are using them for their own purposes.

This shows us how important this field is. Chapter 5. will then bring us back to the most important segment in the relationship between crime and Media- the victims.

Media did good things for victims by making them visible to the general population.

This is closely linked to crimes in which the victims were women, and the display mode of the media in the world for the victims.

In the next chapter we will connect all of this looking at the analysis of the case of death of Jill Meagher.

Our book will also deal with the hidden messages which can be reached by careful analysis of media content.

Whether there are still traces of racial bias? Stereotypes and their construction are certainly not helpful.

This road will take you to popular culture in Chapter 8.

The fact is that the most popular TV dramas are full of violence.

Is this making a Culture of crime and violence in modern world?

Sensationalized local TV news has become heavily focused on crime and accidents in recent decades, and many researchers claim that heavy consumption of local crime news lead one to overestimate crime rates.

Not only do people perceive that there is more crime, but they often feel a personal threat to their safety, and consequently advocate more severe criminal justice policies.

So this is one new aspect, influence of media and indirect impact on our legal systems.

Next Chapters will explore this connection between violence and media more detailed.

Until the Chapter 13. where we get to Copycat killers as products of crimes followed in media.

All of this has led to the hiring of experts for social networks and other media in law enforcement.

Of course, the detailed attention of books such as this is required in the area of cyber-crime and crimes against children.

The final two chapters deal with the popularity of the phenomenon of negative characters in literature and on film, and with the approach to ideologically inspired crimes in the media on the example of the case of Lee Rigby.

The last chapter is a tribute to all journalists who died on duty on the example of Africa.

Noting that a large number of people engaged in this profession are working with competence and professionalism with a great dose of courage.

We wish good luck to all future journalists and men of law.