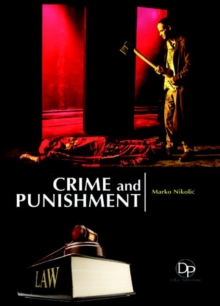 Crime and Punishment, two sides in the eternal carousel.

They always haunt the minds of men. The eternal source of inspiration, fear and emotions. who has the right to determine what is sufficient redress?

Time of duels and mass shootings is behind us. The world has turned to the struggle to find a way to reintegrate penalized in our ranks.

But how far have we come on this way?We are starting from the crucial theoretical question: whether punishment is generally motivated by inequity aversion or by a desire for reciprocity?

An interesting study in Chapter 1. of this book shows that punishment is motivated by a simple desire to reciprocally harm.

This would mean that society is punishing to prevent individual revenge and not to restore the balance that has been lost through violating social norms and rights.

Ultimately the oldest principle in law is "Eye for an eye." But, in the chapter two we will pay attention to the views of the profession, from the perspective of Indian Lawyers.

But, maybe it is not all in people wanting to break rules, after the theoretical section you will read more about the influence of genetics impacts, the basic assumption of free will in criminal law, it can prove that one's actions were not motivated by oneself but by hereditary factors.

Someone can be said to have acted out of free will. This significantly reduces the space for punishment.

Wherever human activity exist there is misconduct. In Chapter 3. researchers are trying to present these rates in Low and Middle-Income countries because the majority of studies is reflecting the problems of high developed states and then transferring conclusions on others.

The fact is that each culture carries its own rules.

If you want to know this area you have to look into every corner of the world.

The resulting "intersectional criminal justice" offers a holistic harm-reduction model that moves the focus of our criminal justice system away from "rough justice" and towards collective restorative healing.

It is not enough just to punish some individual. Modern world needs a positive social change. Various late nineteenth century rationalities considered the fine as a justifiable punishment.

Therefore, they supported extending its application by making it affordable for people on low incomes, which meant imprisonment for fine default could mostly be avoided without undermining the end of punishment.

Chaper 5. investigates the historical development of the penal fine as well as the changing forms of this penalty in Western European Criminal systems from the end of the eighteenth century until the late nineteenth century.

While Chapter 6. considers the continuum of possibilities for including the public from the gratuitous exploitation of the public voice by populists and media entrepreneurs using top-of-the-head opinion polls through to informed public opinion, public consultation process and ultimately the democratization of sentencing policy.

This is a refreshing attitude but the big question is whether society is ready for it.

In any case, the most serious form of punishment is death penalty.

Debates against the death penalty are lasting for tens of years.

Everyone has their own opinion in this field. How to sanction the most serious crimes? Chaper 8. looks at the opinions of Criminal Justice and Law Enforcement Students on the capital punishment and you can see that they are also divided.

Chapter 9 brings the look on the middle decades of the past century.

The idea: rehabilitate, teadjust and change was born and people started thinking on not just to punish but what will happen when the time in prison is over.

Follows the story whether implementation of a crime control model (based, in part, on the concepts of COMPSTAT) in one southern California city was effective in reducing crime.

Time series regression models were fitted to data collected from the Riverside County Sheriff's Department, city of Perris, for the years 2000 through 2010.

Additional data were collected from three other cities that served as controls.

Results showed that the program was effective in reducing crime rates in the town called Perris.

But, is there an option not to come to this point? Chapter 11. is really interesting, it investigates a sequence of dynamic criminal networks on a time series based on the dynamic network analysis (DNA).

According to the change of networks' structure, networks' variation trend is analyzed to forecast its future structure. Finally, an optimal arresting time and priority list are designed based on analysis.

Since the fight against organized crime exists, people are trying to implement a predictable system to place it under control.

Norway's criminal justice policy is increasingly based on principles taken from positive criminology.

This means that the correctional service places strong emphasis on establishing collaboration with the local authorities (the municipalities) in order to offer convicted persons integrated services.

This is described in Chapter 13. Crime rates in Norway confirms a good approach of the local authorities but this country certainly had good economic predisposition.

Up to 2007. the number of traffic fines in the Netherlands was increasing but 2008 saw a decline.

At the same time fines were raised significantly. It is expected that the raise in fines will cause the decline in the number of fines.

But conclusion was that motorists make moderate adjustments in their behavior when fines are raised but only if the risk of being caught is high.

This maybe would not happened in some country with lower life standards.

Surveillance technologies such as electronic monitoring - EM, biometrics, and video surveillance have flourished in commercial environments that market the benefits of asocial technologies in managing disorderly behavior and which, despite often chimerical crime prevention promises, appeal to the ontologically insecure social imagination.

Again, why to focus on reintegrating if we can prevent the crime.

Yet, as in our previous chapter, economic resources play a big role here.

But still there is the violation of the rights to privacy, which becomes a big problem.

On the other hand number of studies have reported that Drug Courts reduced the recidivism of graduates but series of recent analyses suggested that drug courts and similar programs were associated with unintended crime outcomes.

Given that over 220,000 offenders participated in this alternative to incarceration in US and most did not successfully complete the drug court program, jurisdictional crime may have been impacted.

In Chapter 15. you can decide for yourselves was this a good practice. Drawing on ethnographic fieldwork and interviews conducted in the New South Wales justice system, Chapter 16. explores how the stories that offenders are made to accept and tell about themselves often bear little relationship to their own reflections.

It analyses how, despite the expectations of judges and prison authorities, these self?narratives are not products of an offender's soul?searching concerning his past actions and experience.

Prison changes a man in any case and in every way. We should not be so hypocritical to insist on the impact on the convicts where they would act like we want, not as they feel.

The topic of the previous article can bring to psychological harm so in the Chapter 16. we examine the history of arrests among dually diagnosed patients entering treatment, comparing groups with different histories on use of treatment and mutual-help groups and functioning.

We can see the data at intake to treatment and six-month, one-year, and two-year follow-ups, and examine correlates and predictors of legal functioning at the study endpoint.

Again, societies revenge cannot be on the other side of trying to bring back the ones who are paying for their crimes. And what is happening when they do come out to freedom?

Chapter 18. brings a presentation of a study of the effect of a criminal record on employment opportunities in the Milwaukee, Wisconsin labor market.

A quantitative and qualitative method was utilized to examine the effects of a criminal record, race, and the relationship between employers' willingness to hire ex-offenders and their actual hiring of ex-offenders.

We must ask the question do we really want anything with these people among us. Because this is just another proof of hypocrisy. We are bringing them back to the streets and then not giving them anything to do except crime.

The whole process is producing grave stress for both sides, the inmates and legal officers.

Job-related stress affects correctional officers' attitudes toward their work environment, coworkers, and supervisors, as well as their physical and mental health; however, very few studies have examined the relationship between stress and at-titudes toward inmates.

This is the topic of Chapter 19. It looks like we are making the situation worse by trying to help.

Criminal theories look as they have stopped at some point.

While society and the criminal itself are progressing and advancing.

Hacking is a widely used term, it is still not legally established.

Moreover, the definition of the concept of hacking has been deployed in a wide variety of ways in national literature.

This ambiguity has led to various side effects. Do we need specific penalties related to new forms of crime?

Of course we do. Maybe one of the readers is exactly the person with the right idea.

There has also been an explosion of new therapeutic community (TC) programs in prisons across the United States.

Although rapidly increasing in number across the country, there is very little empirical research to support the effectiveness of TC treatment for women.

So we come to the same conclusion as in the previous chapters.

Crime and Punishment is the eternal question of religious, scientific and popular literature.

Are we closer to the answers today after thousands of years since the first human legal codes?

I hope that there will be at least one person among readers which will feel the urge to change something about our prison systems.