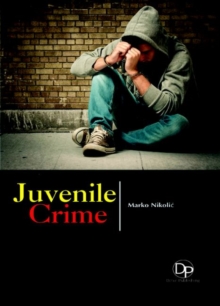 Bullying and harassment of peers are the first possible forms and signs of criminal behavior in the future.

That's why this book is starting from the bases, because the fight against adolescent crime should be addressed to prevention already in the earliest and "harmless" phase.

Bullying behavior continues to be a salient social and health-related issue of importance to educators, criminal justice practitioners, and academicians across the country.

Implications of these findings for school anti-bullying programs as well as directions for future research are discussed. The second chapter deals with the relationship between parental absence and juvenile delinquency to determine if a link exists between the two variables.

The overall model was found to be statistically significant.

Chapter 3 deepens this topic and looks into differences between bullies, victims, and bully victims in terms of the quality of their relationship with their parents and school performance.

In Chapter 4, they tried to investigate whether the quality of attachment with parents and peers predicts bullying and victimization.

Secondly, they also attempted a moderation analysis in order to examine whether the relationship between quality of attachments and bullying is moderated by the child's gender.

Finally, they explored whether there are significant differences in the quality of attachment between children identified as bullies, victims, bully/victims, and uninvolved. Although the link between routine activities and victimization has been tested and well established, criminologists have questioned if routine activities can explain adolescent violence across different social contexts in Chapter 5.

Chapter 6. takes a step back being oriented to pre-school kids.

With Chapter 7 we go to serious juvenile offenders. Factors that precipitate gang membership has contributed substantially to our understanding of gangs and gang-related activity, yet we know little about the factors influencing intentions to rejoin a gang after having being incarcerated.

The study in Chapter 8. explores how perceptions of teacher and student intervention as well as perceptions of school safety and connectedness influence students' likelihood of responding aggressively (i.e., retaliating) or seeking support from an adult. Chapter 9 examined peer victimization and bullying preventions in schools.

It tries to determine whether previous models of preventive strategies in a single school or district could be expanded to the nationally representative sample of adolescents across multiple schools.

In Chapter 10 we explore bullying in rural areas, as a topic which was not studied enough.

Chapter 11 focuses on the anomalies and contradictions surrounding the notion of `international juvenile justice', whether in its pessimistic (neoliberal penalty and penal severity) or optimistic (universal children's rights and rights compliance) incarnations. Chapter 12 takes compulsory hospitalization by evidencing its use as a control and punishment mechanism that increases the social vulnerability of young drug users.

It analyzes lawsuits involving juveniles who were consigned to psychiatric institutions for drug addiction treatment as a protection measure in the state of Rio Grande do Sul, in Brazil. Gender differences in an Australian youth offender population is analyzed in Chapter 13.

Following section aims to test the relationship between structural characteristics of schools and child antisocial behavior, using a sample of elementary school children (N = 779, aged 10-12 years in the urban context of Ghent, Belgium).

Finally the characteristics of juvenile offenders who stop committing crimes are in focus in Chapter 16. Criminality among Victorian boys and girls in the 19th century is our travel through time in Chapter 17.

Do we have the right idea?Chapter 18 states that investing in successful delinquency-prevention programs can save taxpayers seven to ten dollars for every dollar invested, primarily in the form of reduced spending on prisons.

This is something that the whole world needs to take in consideration!

Chapter 19 looks at the prevalence of psychiatric disorders in a sample of delinquent adolescents of both genders and compares the prevalence between genders. Can lower cognitive ability be related to increased risk for violent and other antisocial behavior?

This study linked longitudinal Swedish total population registers to study the association of general cognitive ability (intelligence) at age 18 (the Conscript Register, 1980-1993) with the incidence proportion of violent criminal convictions (the Crime Register, 1973-2009), among all men born in Sweden 1961-1975 (N?=?700,514).