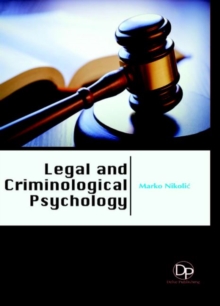 Understanding behaviors and thoughts of criminals can be the key in a criminal investigations but this is also fundamental in prevention of crime.

Figure out patterns of behavior and offenders thought processes can give the law officers a much needed advantage.

This is the study of the wills, thoughts, intentions, and reactions of criminals and all that partakes in the criminal behavior.

Access from the psychological side can tell us what initiates criminal behavior, how criminals react to punitive measures psychologically and what happens in their mind when they are again free.

Of course, we have to mention the psychological profiling of criminals as a way to prevent them in further unlawful activities. We will start from the first step in contact with offenders- investigations.

Psychology can provide useful decision support tools to facilitate the investigation processes and help investigators to give more appropriate decisions.

Then we will be studying Terror Management and criminal ability for empathy in Chapter 2.

This study showed that it is true that mortality salience increases the tendency for individuals to judge criminal defendants harshly, especially defendants from a racial group different than the perceiver.

Another important aspect of this scientific field is the psychology of the victim but also the perception of criminals in publicStudy of the investigation in the Chapter 3. was to provide the possible mediating role of associations with criminal friends between criminal attitudes, and criminal behavior.

Thus results suggest that the presence and influence of criminal friends has a significant mediating effect on the interaction between criminal attitudes and recidivistic behavior. As always, we turned our attention to the children, and the effects of that suffer from violent and criminal behavior in Chapters 4 and 5.

Accuracy of eyewitness's identifications is the subject of Chapter 6.

This is certainly a requirement which produces a large amount of stress for witnesses.

How to help them, without suppressing the rights of suspects?

This study discuss the extent to which double-blind lineup administration has been adopted among police jurisdictions in the United States and address common concerns about implementing a double-blind standard. Employees on these jobs are always exposed to enormous stress levels.

All of this leads to other diseases. Chapter 7. deals with bladder cancer among investigators. We will dedicate the eighth chapter to the detailed picture of the status of mentally ill offenders-including prevalence, basic demographic information, bio-psycho-social status, mental health, and family histories-and also to identify the problems, conditions, and obstacles faced while under the jurisdiction of the criminal justice system. A Feasibility Study in Chapter 9. brings a retrospective study reports on the prevalence of malingering in a sample of 20 homicide defendants seen in jail settings for criminal responsibility evaluations, and the feasibility of the Schedule for Non adaptive and Adaptive Personality (SNAP) for malingering detection. Psychiatric conditions as Dissociative Identity Disorder are linked to severe and prolonged childhood abuse, accounts of DID patients inevitably involve reports of serious crimes, in which the person was the victim, perpetrator or witness.

So far as Attention Deficit Hyperactivity Disorder, study in Chapter 11. concluded that bringing together experts in adult ADHD and the Criminal Justice System (CJS) will be vital to raising awareness of the needs of ADHD offenders at every stage of the offender pathway. Study in Chapter 12. Examined relationship between psychological "identification"-or the process by which an unstable person subsumes his or her own identity and models themselves after a violent aggressor-and acts of targeted violence.

Findings included among other: In the context of threat assessment, identity becomes embedded in aggressive identifications, if not extremely violent images of the self in action, most often apparent in the fantasies of the young adult as a perpetrator of homicide against another.

Therefore the section 13.The mind of serial killers is something that occupies minds around the world and when it comes to popular culture and as far as the professional literature.

Chapters 16, 17 and18. have one interesting subject: false confessions. What makes people to confess to something they did not commit?Criminal Profiling (CP) is one of the crucial topics in forensic psychology and probably the future of criminal psychology so we dedicate Chapter 19 to it.

We have already mentioned how much stress can be harmful to people who are constantly exposed to it.

We will underline this once again at the end. Psychic energy must be saved the same as physical. Correct approach can unlock the minds of big social subcultures.

Imagine how many live's you can save if you succeed in this.