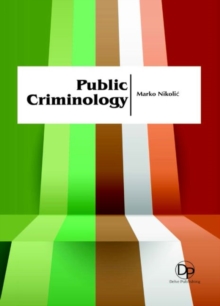 Some scholars use the plural term public criminologies to indicate that there are multiple publics and many possible interpretations of how to bridge the gap between academic criminology and public discourse.

Those with the interests and skills to carry criminological theories and research into the public debate offer an important service.

They may debunk myths and help to reframe the cultural image of the criminal, they may offer social facts on crime and punishment and bring context to highly sensationalized cases, they may work with communities to compile data and answer pressing questions, and they may bring the best available evidence to conversations and debate on issues of criminal justice public policy.

Meaning of the research to larger publics, it seeks to narrow the yawning gap between public perceptions and the best available scientific evidence on issues of public concern. We'll start with a pessimistic view. Of course we should make closer connection between science and public, but can we rely on data gathered from public sources?

Chapter 1 is there to warn people to be careful when interpreting acts of others.

In second Chapter children participated in a mock courtroom experiment, in which they were asked to recount either a true or fabricated event.

Chapter 3 begins by examining the historical and institutional factors that have contributed to the continuing subjugation of Indigenous knowledges and methodologies.

A discussion of the connections between the hegemony of Western science, the construction of race, and the colonial project follows.

This chapter is in this book because of the importance of methodologies conceived in other parts of the world, to get closer to the general public and population, we must respect scientific achievements from places they originated from.

Imaginative criminology movement offers a challenge to an orthodox criminology that is guided by the coercive and constraining bureaucratic categories of criminal justice administration and the criminal law, making it closer to the public.

Chapter 5 reports examples of qualitative studies (from ethnography, hermeneutical sociology of knowledge, ethnomethodology/conversation analysis, discourse analysis and narrative analysis) especially of deviant subcultures, reporting conflicts to the police, police inquiries and interrogations and criminal court procedures. And the next chapter prompted by the need to expand the criminological enterprise makes a case for a critical criminology of education, one that takes a governance approach.

It seeks to illustrate what such a criminology might entail by developing an analytic framework with which to analyze the educational field.

In our Chapter 7 we argue that a particular symbolic construction of social space, as experienced and constructed by weapon-carrying young white men in Glasgow.

Chapter 8 reflects on two themes from Chambliss's work: the debate between state-centered and more pluralistic views of law, and the "dialectical" approach to the analysis of state crime.

Chapter 9 makes the case that criminology has much to contribute to an understanding of theistic violence.

Using the terrorist attacks in France 2015 as a touchstone, this Chapter explores the current state of criminological engagement with these issues.

Chapter 10 presents the findings of an ethnographic exploration of heroin use in a disadvantaged area of the United Kingdom while Chapter 11 explores the central role of documentary filmmaking as a methodological practice in contemporary criminology.

Chapter 12 analyses the factors behind the paradoxical result of the Brazilian gun-control referendum.

It adopts a qualitative approach to explore the dissemination of ideologies surrounding crime, gun control and security.

While Chapter 13 provides an in-depth study of the Act on Municipal Administrative Sanctions 1999 (MAS), which is the first major piece of legislation regulating antisocial behavior in Belgium.

Newsmaking criminology argues that criminologists should interpret, influence, and even shape the direction of newsworthy information about crime and justice to the extent that they aggressively make their presence known by engaging the media.

Chapter 14 calls for an expansion in the practice of newsmaking criminology to also include criminal justicians, as well as social workers when it comes to the issue of school violence.

Metaphors pervade discussions of critical issues, making up as much as 10-20% of natural discourse.

More on this subject in the Chapter 15, while Chapter 16 examined associations between perceived neighborhood illicit drug selling, peer illicit drug disapproval and illicit drug use among a large nationally representative sample of U.S. high school seniors as a base from we should start in finding ways for bringing Criminology familiarized with general population.

Objective of the study in Chapter 17 was to describe the physical, social, and psychological initiation practices of street connected children and youths, in Eldoret, western Kenya.

As we said before, working with people in underde-veloped countries is as much important.

Based on narratives with a high frequency of spatial language, recent research presented in Chapter 18 has questioned this perspective, suggesting that space is more critical than may be readily apparent.

Through an analysis of spatially rich serial criminal narratives, it will be demonstrated that spatial information qualitatively varies relative to narrative events.

In particular, statistical classifiers in a supervised machine learning task achieve a 90% accuracy in predicting Pre-Crime, Crime, and Post-Crime events based on spatial (and temporal) information.

Chapter 19 applies feminist theory with cultural criminology to explore the role of theatre in the lives of criminalized women.

Theatre initiatives for criminalized populations are growing worldwide, and so we are seeking to better understand how these two realms intersect.

Going public is including connections with the whole spectrum of interests of both, criminalized individuals and criminals.

Going closer means to better understand! We will finish with Chapter 20 which as an attempt to understand the social transformation of cultural land scapes in Southern Italy where the lands have been governed by various mafia clans for decades.

After some toil, Libera Terra, which is one of the branches of the Libera (the largest not-for-profit and anti-Mafia civil society organization in Italy), declared a civic struggle against the Mafia in the mid-1990s.

I hope that future will bring more books which will be appealing to youth and laics and remain based on scientific foundations, but the most important for all of us are results.