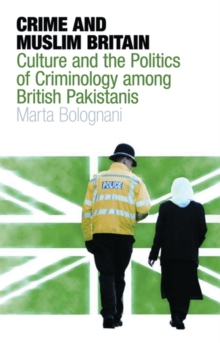 Crime and Muslim Britain : Race, Culture and the Politics of Criminology Among British Pakistanis Hardback

Part of the Library of Crime and Criminology series

The Britain of the early twenty-first century has become consumed by heightened concerns about violent crime and terrorism in relation to Muslim communities in the West.

Here Marta Bolognani fills a major gap in criminology and diaspora studies through an exhaustive investigation into crime among British Pakistanis.

Through detailed ethnographic observation and interview data, Bolognani shows how Bradford Pakistanis' perceptions of crime and control are a combination of the formal and informal, or British and 'traditional' Pakistani, that are no longer separable in the diasporic context.

She also examines local and national state policies that are geared to preventing crime and shows how crime comes to be understood by participants as well as institutional actors.

Offering a counterpoint to the 'taboo' of talking about crime and race in cultural terms, "Crime in Muslim Britain" is essential for all those interested in criminology, ethnicity and the predicaments of Muslim communities today.