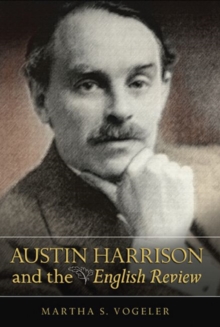 Political and literary journalist Austin Harrison became editor of the ""English Review"" in 1910.

While holding that chair, he expanded the publication's literary scope by publishing articles on such issues as woman suffrage, parliamentary reform, the German threat, and Irish home rule.

But although he edited the ""Review"" far longer than its celebrated founder, Ford Madox Ford, history has long confined him to the shadows of not only his predecessor but also his father, the English Positivist Frederic Harrison.This first scholarly assessment of Harrison's tenure at the ""English Review"" from 1910 to 1923 shows him courting controversy, establishing reputations, winning and losing authors, and pushing the limits of the publishable as he made his ""Great Adult Review"" the most consistently intelligent and challenging monthly of its day.

Martha Vogeler offers a compelling personal and family narrative and a new perspective on British literary culture and political journalism in the years just before, during, and after the First World War.Vogeler provides a revealing account of Harrison the editor - his writings and opinions, his public life and relations - as she also traces the complex relationship between a son and his famous father.

Balancing a scholar's attention to detail and a fine writer's eye for style, she relates Harrison's improbable friendships with the notorious Frank Harris and the outrageous Aleister Crowley. And she has mined Harrison's correspondence to lend insight into the careers of such writers as Ford Madox Ford, D.

She describes his transformation from Germanophobe before and during World War I to an outspoken critic of the punitive measures against Germany in the Treaty of Versailles.

She explores the ambiguities in his engagement with modernist aesthetics and in his attempt to escape the shadow of his father while benefiting from his family's wealth and connections.

Vogeler's assessment of Harrison's books further sharpens our understanding of his ideas about Germany, women, education, and Victorian family life - notably his underappreciated tribute/rebuke to his father, ""Frederic Harrison: Thoughts and Memories"".

This account of Austin Harrison's career allows us to observe a journalist making his way in a highly competitive world and opens up a new window on Britain in the era of the Great War.