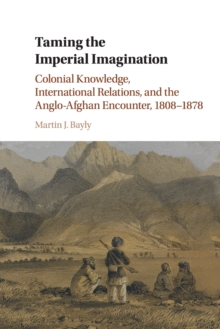 Taming the Imperial Imagination marks a novel intervention into the debate on empire and international relations, and offers a new perspective on nineteenth-century Anglo-Afghan relations.

Martin J. Bayly shows how, throughout the nineteenth century, the British Empire in India sought to understand and control its peripheries through the use of colonial knowledge.

Addressing the fundamental question of what Afghanistan itself meant to the British at the time, he draws on extensive archival research to show how knowledge of Afghanistan was built, refined and warped by an evolving colonial state.

This knowledge informed policy choices and cast Afghanistan in a separate legal and normative universe.

Beginning with the disorganised exploits of nineteenth-century explorers and ending with the cold strategic logic of the militarised 'scientific frontier', this book tracks the nineteenth-century origins of contemporary policy 'expertise' and the forms of knowledge that inform interventions in Iraq, Afghanistan and elsewhere today.