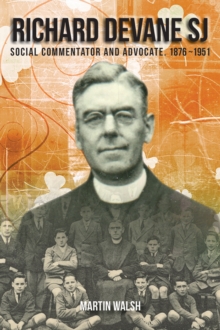 Fr Richard Stanislaus Devane SJ was a social advocate and campaigner in the early years of the Irish Free State, yet surprisingly little has been written about him.

Some recognition has been given to his work on social aspects of legislation in the first decades of the new Irish Free State.

Other than that, there are only vignettes of his call for an Ireland moulded according to true Christian values.

In his early career as a parish priest little has been documented about his zeal to order and control the lives fo the working-classes.

In truth, his opinions, beliefs and thinking were shaped before he joined the Jesuits in 1918.

This comprehensive study is therefore required to place Fr Richard Devane SJ within the narrative of Irish history of the early twentieth century.