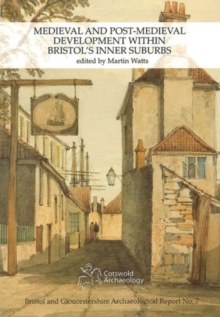 This volume contains the results of four archaeological projects undertaken within the historic suburbs of Bristol.

Excavations at nos 26-28 and at nos 55-60 St Thomas Street were both within the 12th-century planned suburb of Redcliffe, just to the southeast of the medieval city.

Investigations at Harbourside and at Cabot House, Deanery Road, were undertaken in the medieval district of Billeswick, to the southwest of the city centre and in the vicinity of Bristol Cathedral, formerly the church of the 12th-century St Augustine's Abbey.

However, it is the general lack of evidence for significant development at these sites throughout the medieval and post-medieval periods and up to the beginning of the 18th century that provides a common theme. The scarcity of evidence for medieval and post-medieval development at the Billeswick sites, Cabot House and Harbourside, is unsurprising as both were in the ownership of the abbey or cathedral throughout this period, and were clearly of value as undeveloped land, either as parkland (as at Cabot House) or meadow (i.e.

Canon's Marsh at Harbourside). The dearth of evidence from the St Thomas Street sites in Redcliffe was more unexpected, though this appears to corroborate documentary evidence suggesting that this part of the suburb remained something of a backwater into late post-medieval times.

At nos 55-60, there was little evidence for anything more substantial than simple boundaries and timber structures, perhaps used for drying cloth, until the beginning of the 18th century.

At nos 26-28 there was no evidence for tenements until late into the post-medieval period and the site may well have been part of a medieval grange.

The development of the first substantial buildings at both St Thomas Street sites, of new streets and terraces at Cabot House, and of the ropewalks and later industrial development of Canon's Marsh at Harbourside, all reflect the rapid expansion and building boom Bristol enjoyed in the 18th century, largely a result of the city's involvement in the Atlantic trade.