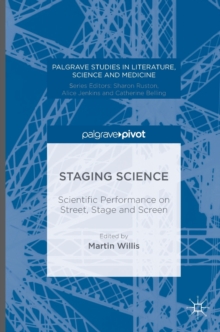 Part of the Palgrave Studies in Literature, Science and Medicine series

This book considers scientific performances across two centuries, from the early nineteenth century to the present day.

Performances include demonstrations of technologies, experiments that look like theatre, theatre that looks like science, tourist representations and natural history film-making.

Its key aim is to open debate on how scientific activity, both historical and contemporary, might be understood in the context of performance studies and the imaginative acts required to stage engaging performances. Scientific performances have become increasingly of interest to historians of science, literature and science scholars, and in the field of science studies.

As yet, however, no work has sought to examine a range of scientific performances with the aim of interrogating and illuminating the kinds of critical and theoretical practices that might be employed to engage with them.

With scientific performance likely to become ever more central to scholarly study in the next few years this volume offer a timely, and early, intervention in the existing debates, and aims, too, to be a touchstone for future work.