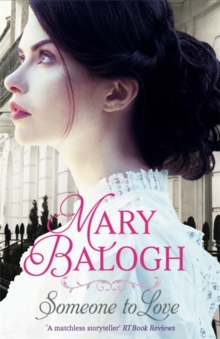 Someone to Love Paperback / softback

'One of the best!' Julia Quinn, Sunday Times bestselling author of the Bridgerton series Humphrey Wescott, Earl of Riverdale, has died, leaving behind a fortune that will forever alter the lives of everyone in his family - including the daughter no one knew he had... Anna Snow grew up in an orphanage in Bath knowing nothing of the family she came from.

Now she discovers that the late Earl of Riverdale was her father and that she has inherited his fortune.

She is also overjoyed to learn she has siblings. However, they want nothing to do with her or her attempts to share her new wealth.

But the new earl's guardian is interested in Anna... Avery Archer, Duke of Netherby, keeps others at a distance.

Yet something prompts him to aid Anna in her transition from orphan to lady.

As London society and her newfound relatives threaten to overwhelm Anna, Avery steps in to rescue her and finds himself vulnerable to feelings and desires he has hidden so well and for so long. This is the sparkling first novel in the Regency romance Westcott series by New York Times bestselling author Mary Balogh - perfect for fans of Grace Burrowes and Stephanie Laurens The Westcott Series:Someone to LoveSomeone to HoldSomeone to WedSomeone to CareSomeone to TrustSomeone to HonourSomeone to RememberSomeone to RomanceSomeone to CherishPraise for Mary Balogh'Today's superstar heir to the marvellous legacy of Georgette Heyer' Susan Elizabeth Phillips'A grand mistress of the genre' Romantic Times'Balogh is the queen of spicy Regency-era romance, creating memorable characters in unforgettable stories' Booklist'Mary Balogh sets the gold standard in historical romance' New York Times bestselling author Jayne Ann Krentz'A romance writer of mesmerising intensity, Mary Balogh has the gift of making a relationship seem utterly real and utterly compelling' Mary Jo Putney'A matchless storyteller' RT Book Reviews