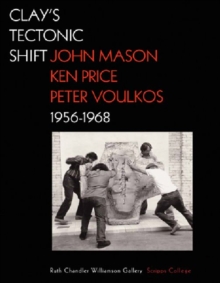 This is an absorbing look at the work of three artists who paved the way for ceramics to be considered fine art. "Clay's Tectonic Shift" focuses on artists John Mason (b. 1927), Kenneth Price (b. 1935), and Peter Voulkos (1924-2002) and their radical early work in post-war Los Angeles where they formed the vanguard of a new California ceramics movement.

The three artists broke from the craft tradition that emphasized the function of a piece.

Instead, they experimented with scale, surface, colour, and volume, creating work that was instrumental in elevating ceramics from a craft to a fine art.