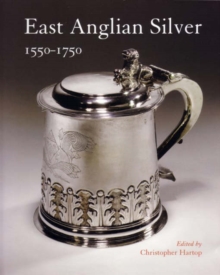 The beauty and stunning craftsmanship of silver made in East Anglia have long been celebrated by scholars and collectors.

This book describes in depth a wealth of important silver articles made in the region which are now to be found in museums and private collections in Britain, America and Australia, as well as in churches in Norfolk, Suffolk and Essex.

Many of the objects featured have never been published before, including a beaker in the Royal Collection by Elizabeth Haslewood, Norwich's only woman silversmith of the Stuart period, and a magnificent Charles II tankard from the Gregory Peck collection.

The essays, the results of new research on many aspects of the economic and social history of the region, set the silver in its historical context.

They present a fascinating perspective on everyday life for many East Anglians during the sixteenth and seventeenth centuries.

Even modest households might have owned a few silver spoons at that time. The consumer demand from yeomen, merchants and others was filled by silversmiths working not only in Norwich, the second largest city in the kingdom, but also in smaller towns such as King's Lynn, Great Yarmouth, Beccles, Ipswich, Colchester and Cambridge.

Norwich closely guarded its right to mark silverware made in the city with its civic arms.

In the reign of Elizabeth, silversmiths there such as William Cobbold made objects to equal the finest creations of London, Antwerp and Amsterdam.

European influences, especially from the Netherlands, were especially important in Norwich, which had a large community of immigrant craftsmen during the sixteenth and seventeenth centuries.

Nearly a hundred photographs of marks used by silversmiths throughout East Anglia, many of them newly identified, make this book an essential tool for the collector as well as the local historian. '...a work of art in its own right.' Ian Collins in Eastern Daily Press