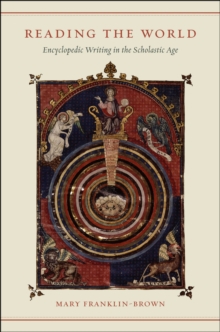 Reading the World : Encyclopedic Writing in the Scholastic Age Hardback

The thirteenth century saw such a proliferation of new encyclopedic texts that more than one scholar has called in the "century of the encyclopedias." Variously referred to as a speculum, thesaurus, or imago mundi - the term encyclopedia was not commonly applied to such books until the eighteenth century - these texts were organized in such a way that a reader could easily locate a collection of authoritative statements on any given topic. Because they reproduced, rather than simply summarized, parts of prior texts, these compilations became libraries in miniature.

Franklin-Brown analyzes the order of knowledge in these challenging texts; the diverse discourses that they absorb from preexisting classical, patristic, and medieval writing; and the ways in which the juxtaposition of those discourses alters their interplay. In doing so, she suggests revisions to our understanding of scholastic literary and intellectual practices, and a more nuanced view of medieval reading as an activity that involved evaluating, harmonizing, or even overlooking some passages in order to adjudicate meaning.