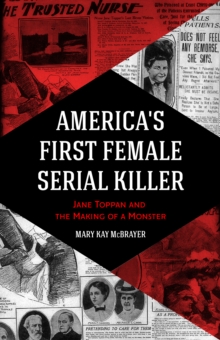 The First Lady-Serial KillerThe nurse from hell. Always cheerful, helpful, and sweet, nurse Jane Toppan was the last person you would suspect to administer a dose of death.

When countless patients sought treatment for minor ailments and ended up dead, it was often thought accidental, due to the shortcomings of medicine in the late 1800s.

But behind the jolly mask, there was a monster that was years in the making. From kind to killer. When Jane was a young child, her father abandoned her and her sister to the Boston Female Asylum.

From there, she was never saw her sister again, was indentured to a wealthy family who changed her name, never adopted her, wrote her out of the will, and essentially taught her how to hate herself.

Jilted at the altar, Jane became a nurse for hire and took control of her life-and the lives of her victims. Fact is stranger than fiction. If you have ever wondered how killers are made, this intimate account of "Jolly Jane," America's first female serial killer, will take you behind the curtains and into shadowy depths.

This book is an imagined retelling of Jane Toppan-one of the deadliest poisoners of all time-and readers will get a fly-on-the-wall perspective that will leave them up at night.