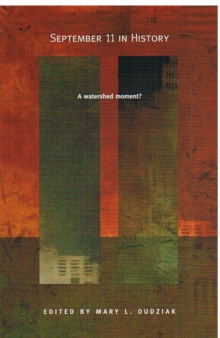 Hours after the collapse of the Twin Towers, the idea that the September 11 attacks had "changed everything" permeated American popular and political discussion.

In the period since then, the events of September 11 have been used to justify profound changes in U.S. public policy and foreign relations. Bringing together leading scholars of history, law, literature, and Islam, September 11 in History asks whether the attacks and their aftermath truly marked a transition in U.S. and world history or whether they are best understood in the context of pre-existing historical trajectories.

From a variety of perspectives, the contributors to this collection scrutinize claims about September 11, in terms of both their historical validity and their consequences.

Essays range from an analysis of terms like "ground zero," "homeland," and "the axis of evil" to an argument that the U.S. naval base at Guantanamo Bay has become a site for acting out a repressed imperial history.

Examining the effect of the attacks on Islamic self-identity, one contributor argues that Osama bin Laden enacted an interpretation of Islam on September 11 and asserts that progressive Muslims must respond to it.

Other essays focus on the deployment of Orientalist tropes in categorizations of those who "look Middle Eastern," the blurring of domestic and international law evident in a number of legal developments including the use of military tribunals to prosecute suspected terrorists, and the justifications for and consequences of American unilateralism.