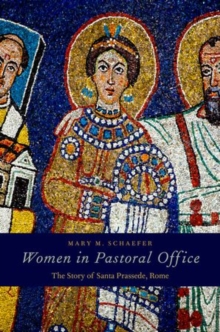 Through a study of the church of Santa Prassede, Mary M.

Schaefer offers a compelling examination of the ''golden ages'' for women active in ecclesial ministries, critically measuring feminist claims and providing evidence contrary to the official Roman position that women have never been ordained in the Catholic Church.

The ninth-century church of Santa Prassede has been studied intensively in recent years, yet no scholar has yet recognized the significance of the balanced male and female imagery: both men and women disciples, Peter and Paul as family friends, Praxedes and her sister as house church leaders in the post-apostolic period assisted by bishop Pius I, and Pope Paschal's mother Theodora episcopa, for example.

Praxedes' identification as ''presbytera'' by a Roman priest-historian in 1655 and by theBenedictine prior of the church in 1725 prompts analysis of women's ordination rites in churches of East and West.

Santa Prassede preserves one of the largest intact programs of church decoration in Rome up to 1200.

Schaefer investigates its scriptural and liturgical sources, and, in turn, reexamines its foundation myth.

With the story of the church, Schaefer provides a detailed study of women in pastoral office (especially diaconas, presbyteras, and episcopal abbesses) from the first through twelfth centuries in the West.

Women in Pastoral Office also shows how the liturgy as well as the vita ofPraxedes and her sister Pudentiana (whose fourth century church is located down the hill) shaped this outstanding commission of the builder, Pope Paschal I (817-824).