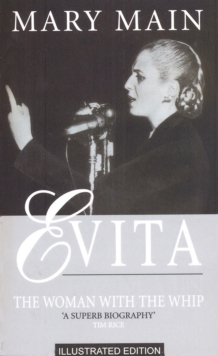 Evita: The Woman With The Whip Paperback / softback

Maria Eva Duarte de Peron was born in poverty in 1919 and died of cancer in 1952, at the age of 33, the richest and most powerful woman in Argentina.

Her story is one of the most fantastic in history. Driven by a compelling ambition, she made her way to Buenos Aires and set about becoming an actress.

In a very short time she had climbed to the top of Argentina's military-social ladder until at last she met Colonel Juan Peron -and her climb took a new direction. Here is the story of 'Evita' and how her rise to power became an almost unbelievable account of intrigue, bloodshed, and pure chicanery.

Her multimillion-dollar tour of Europe; her setting up of the Eva Peron Foundation whereby she cornered the market on clothes, toys, books, groceries, imported drugs, medical equipment, and housing; her impassioned campaign speeches; her shameless flaunting of jewels and clothes in the very faces of her worshipping 'shirtless ones' - these are but a few of the facets of her incredible career that are described in detail. There was a fatal fascination about Eva Peron that remains, even after her death - an aura of evil that has become a legend.