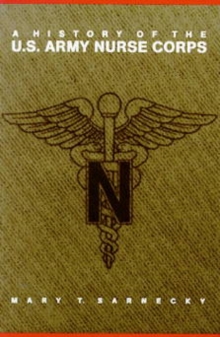 A History of the U.S. Army Nurse Corps Hardback

Thousands of women have served in the Nurse Corps of the U.

S. Army. Many of them worked in war zones, where their extraordinary courage, resourcefulness, and toughness first astonished and then won the respect of male officers.

Their skill and dedication helped to save tens of thousands of lives and made the Army Nurse Corps an essential part of the American military establishment.

Until now, there has been no comprehensive work that tells that story. In this book Mary Sarnecky describes the major stages in the development of the U.S.

Army Nurse Corps, discusses the political and social context in which this development occurred, identifies the factors that have influenced the Corps' stature and reputation within the nursing community, and explores the impact of the Corps upon the profession of nursing.

At the same time, she described the experiences of the nurses themselves-often in their own words. The history is as surprising as it is violent: during World War I, nurses were the first American Army units to fly the United States flag in France from their base hospitals in support of British troops.

In World War II, Army nurses served at every front, from Alaska to the Philippines, from England to the beaches of Anzio, where several died in bombings while tending to the wounded.

With the advent of helicopters to transport wounded soldiers rapidly to hospitals, MASH units and their nurses became immediate caretakers of severely traumatized patients from front-line action in the Korean War.

These units continued their work in the next decade during the Vietnam War. The story of these women and of the organization they created in the midst of one of our most deliberately masculine institutions is important to both the history of the military and the history of women in America.