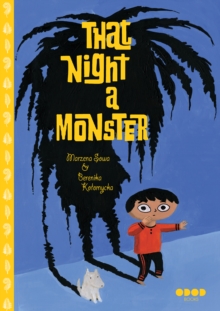 "Lovingly written and painted, this strange and silly book will delight everyone who reads it. The grown-up people who read it may find it confusing.

But young people, I think, will understand that in its strangeness and silliness it mirrors our own strange and silly world." -Eleanor Davis, author of Stinky and How to Be HappyThomas is a friend to all plants.

He even has a cactus collection! One morning, he discovers his mother has been replaced by a ferna monstrous fern!

What happened? Is this the start of a plant revolt? Did the fern eat her? Where did this fern come from, anyway? Will it eat his father too? And then Thomas? That Night, A Monster . . . is a beautifully painted all-ages graphic novel exploring imagination: its power and its dark side. Marzena "Marzi" Sowa is a Polish graphic novelist living in France.

She was born in 1979 in the small industrial city Stalowa Wola.

She left her country in 2001 and settled in Bordeaux.

Marzi, her graphic memoir about childhood in communist Poland, was published by Vertigo in 2011.

The book has been translated in several languages. Marzi loves dictionaries, is afraid of spiders, and is crazy about skateboarding and cheesecake. Berenika Kolomycka is a cartoonist, sculptor, and illustrator.

In 2011, she received the Grand Prix at the Lodz International Comics Festival.

She lives in Poland.