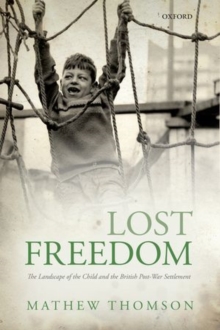 Lost Freedom : The Landscape of the Child and the British Post-War Settlement Hardback

by Mathew (Reader in History, University of Warwick) Thomson

Lost Freedom addresses the widespread feeling that there has been a fundamental change in the social life of children in recent decades: the loss of childhood freedom, and in particular, the loss of freedom to roam beyond the safety of home.

Mathew Thomson explores this phenomenon, concentrating on the period from the Second World War until the 1970s, and considering the roles of psychological theory, traffic, safety consciousness, anxiety about sexualdanger, and television in the erosion of freedom. Thomson argues that the Second World War has an important place in this story, with war-borne anxieties encouraging an emphasis on the central importance of a landscape of home.

War also encouraged the development of specially designed spaces for the cultivation of the child, including the adventure playground, and the virtual landscape of children's television.

However, before the 1970s, British children still had much more physical freedom than they do today.

The volume pays particular attention to the 1970s as a period of transition, and one which saw radical visions of child liberation, but with anxieties about child protection also escalating in response.

This is strikingly demonstrated in the story of how the paedophile emerged asa figure of major public concern.

Thomson argues that this crisis of concern over child freedom is indicative of some of the broader problems of the social settlements that had been forged out of the Second World War.