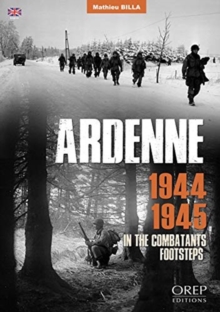 At the end of 1944, the Axis forces led by Nazi Germany seemed to be out of breath.

Many Allied soldiers, although stunned by the recent battles of autumn, were turning their minds to the next Christmas party.

In the liberated towns, the population benefited from its newfound freedom, but was preparing to face another winter with rationing.

On December 16th, to everyone's surprise, Hitler launched his last big offensive in Belgium and Luxembourg, moving through the Ardennes forests.

With almost 300,000 committed fighters, he wanted to reverse the course of the war, playing his last card... This book explores the famous Ardenne campaign which took place during the winter of 1944-1945.

The German offensive of December 1944 is briefly put in context, and then summarized in its main points.

The less well known battles of January 1945 are explored through the fate of the 84th division of the American infantry, which included a 21-year-old German youth named Henry Kissinger, not yet the famous diplomat of the 1960s.

This guide presents the battle through the perspective of the combatants, focusing on their daily lives, and showing the human experience of those men and women, military and civilian, who struggled to stay alive during this terrible winter.

From Elsenborn to Echternach, and of course, encompassing Bastogne, this book leads you in the footsteps of the fighters.