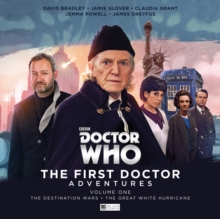 Part of the Doctor Who - The First Doctor Adventures series

This very special release features a recreation of the first ever cast of Doctor Who, as seen on BBC TV in 2013's celebratory An Adventure in Space and Time, with David Bradley then appearing as the Doctor in 2017's Peter Capaldi finale at Christmas. 1.1 The Destination Wars by Matt Fitton. The TARDIS arrives in a gleaming utopia in the Space Year 2003.

Has the Doctor truly brought Ian and Barbara home, to glimpse their future?The world owes much to its legendary Inventor, and Susan finds herself face to face with the great benefactor.

But soon, the time travellers are in a world at war and the Doctor must confront his past. 1.2 The Great White Hurricane by Guy Adams. Rival gangs turn streets into battlegrounds, and the Doctor and his friends are caught in the crossfire.

They find themselves separated, and lost in the cold.

As the hunt for a fugitive turns ever more desperate, a blizzard descends.

The snow keeps falling. And soon it will prove as deadly as any weapon. Jemma Powell (playing the Doctor's companion Barbara Wright) is currently starring in the BBC's The Last Post drama and James Dreyfus' portrayal of The Master is the earliest detailed meeting between the Doctor and his arch nemesis.

Director Nicholas Briggs is not only the executive producer at Big Finish, but is known for his voice-work on Doctor Who, most notably for the chilling tones of the Daleks!

Also in the Doctor Who - The First Doctor Adventures series 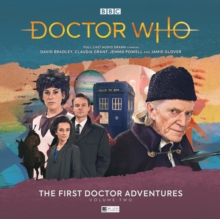 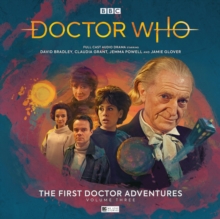