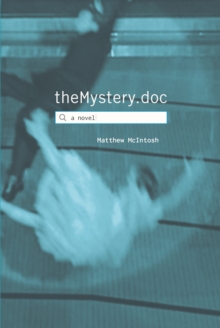 Rooted in the western United States in the decade post-9/11, theMystery.doc follows a young writer and his wife as he attempts to write his second book, a national epic he hopes will last forever, and as he searches for a form that will express the world as it has become, revealing the interconnectedness of all our lives.

Pop-up ads, internet search results, spam, lines of code, frames of film and television mix with canonical works of literature, alchemical manuscripts, transcripts of personal conversations, and the story of a man who wakes up one morning not knowing who he is, a blank document called themystery.doc newly appeared on his computer.

Part love story, part prose poem, part documentary, part existential whodunit, part future-fiction, part Bildungsroman, part memoir, theMystery.doc is about the quest to find something lasting in a world where everything is in danger of slipping away.

Love, loss, birth, death, technology, terrorism and the American Dream come together to form a great symphonic work that dazzles in both its structure and in its deep emotional resonance.