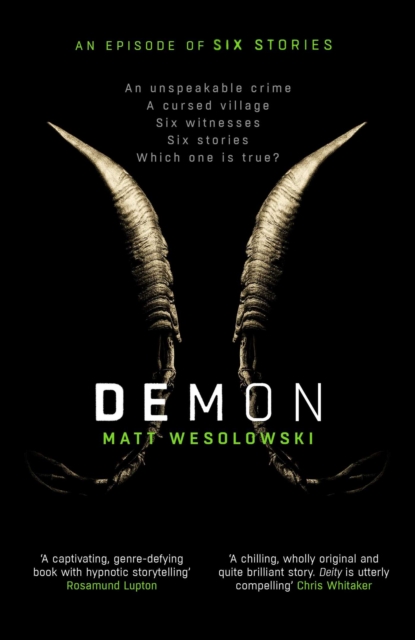 Scott King investigates allegations of demon possession in a rural Yorkshire village, where a 12-year-old boy was murdered by two young children.

A masterful storyteller, Matt Wesolowski is my go-to writer for literary horror' C J Cooke, author of The Lighthouse Witches____________In 1995, the picture-perfect village of Ussalthwaite was the site of one of the most heinous crimes imaginable, in a case that shocked the world. Twelve-year-old Sidney Parsons was murdered by two boys his own age.

No reason was ever given for this terrible crime, and the 'Demonic Duo' who killed him were imprisoned until their release in 2002, when they were given new identities and lifetime anonymity. Elusive online journalist Scott King investigates the lead-up and aftermath of the killing, uncovering dark stories of demonic possession, and encountering a village torn apart by this unspeakable act. And, as episodes of his Six Stories podcast begin to air, and King himself becomes a target of media scrutiny and public outrage, it becomes clear that whatever drove those two boys to kill is still there, lurking, and the campaign of horror has just begun... ____________ 'Matt Wesolowski is boldly carving his own uniquely dark niche in fiction' Benjamin Myers'Matt's real skill is in finding a deeply human story and twisting it with the paranormal, touching the reader and scaring the wits out of them' Chris MacDonald'One of the most exciting and original voices in crime fiction' Alex North'A wonderful writer' Chris Whitaker'I'll be rereading these books forever' Sublime Horror'The master of horror, of mixing folklore with urban myth and real life.

Intriguing, disturbing and impeccably crafted - I was riveted from the first page' Lucie McKnight Hardy, author of Dead RelativesPraise for the Six Stories series: **Longlisted for Theakston's Old Peculier Crime Novel of the Year****Winner of the Capital Crime Best Independent Voice Award**'A captivating, genre-defying book with hypnotic storytelling' Rosamund Lupton Original, inventive and dazzlingly clever' Fiona Cummins'Daisy Jones and the Six gone to the dark side.

I couldn't put it down' Harriet Tyce'Bold, clever and genuinely chilling with a terrific twist' Sunday Mirror'Insidiously terrifying, with possibly the creepiest woods since The Blair Witch Project' C J Tudor'Frighteningly wonderful ... one of the best books I've read in years' Khurrum Rahman'Disturbing, compelling and atmospheric, it will terrify and enthral you in equal measure' M W Craven'A dark, twisting rabbit hole of a novel.

You won't be able to put it down' Francine Toon'First-class plotting' S Magazine'A dazzling fictional mystery' Foreword Reviews'Readers of Kathleen Barber's Are You Sleeping and fans of Ruth Ware will enjoy this slim but compelling novel' BooklistFor fans of Serial, The Conjuring, C J Tudor, Fiona Cummins, Sarah Pinborough and Catriona Ward 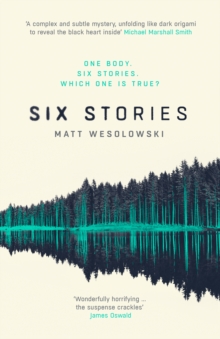