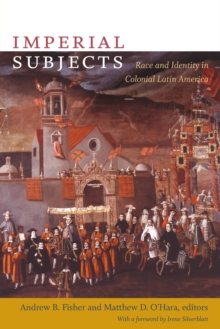 In colonial Latin America, social identity did not correlate neatly with fixed categories of race and ethnicity.

As Imperial Subjects demonstrates, from the early years of Spanish and Portuguese rule, understandings of race and ethnicity were fluid.

In this collection, historians offer nuanced interpretations of identity as they investigate how Iberian settlers, African slaves, Native Americans, and their multi-ethnic progeny understood who they were as individuals, as members of various communities, and as imperial subjects.

The contributors' explorations of the relationship between colonial ideologies of difference and the identities historical actors presented span the entire colonial period and beyond: from early contact to the legacy of colonial identities in the new republics of the nineteenth century.

The volume includes essays on the major colonial centers of Mexico, Peru, and Brazil, as well as the Caribbean basin and the imperial borderlands.Whether analyzing cases in which the Inquisition found that the individuals before it were "legally" Indians and thus exempt from prosecution, or considering late-eighteenth- and early-nineteenth-century petitions for declarations of whiteness that entitled the mixed-race recipients to the legal and social benefits enjoyed by whites, the book's contributors approach the question of identity by examining interactions between imperial subjects and colonial institutions.

Colonial mandates, rulings, and legislation worked in conjunction with the exercise and negotiation of power between individual officials and an array of social actors engaged in countless brief interactions.