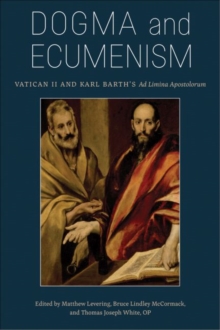 The conversation of this book is structured around five major documents from the Second Vatican Council, each of which Barth commented upon in his short but penetrating response to the Council, published as Ad Limina Apostolorum.

In the two opening essays, Thomas Joseph White reflects upon the contribution that this book seeks to make to contem-porary ecumenism rooted in awareness of the value of dogmatic theol-ogy; and Matthew Levering explores the way in which Barth's Ad Limina Apostolorum flows from his preconciliar dialogues with Catholic repre-sentatives of the nouvelle theologie and remain relevant to the issues facing Catholic theology today.

The next two essays address the Dogmatic Constitution on the Church, Lumen Gentium, which touches upon central differences of Cath-olic and Protestant self-understanding.

The next two essays take up Nostra Aetate: Bruce McCormack (Protestant) asks whether it is true to say that Muslims worship the same God as Christians, and Bruce D.

Marshall (Catholic) explores the implications of the Council's reflections on the Jewish people.

The next two essays take up the Pastoral Constitu-tion on the Church in the Modern World, Gaudium et Spes: John Bowlin (Protestant) makes use of the thought of Aquinas to consider the prom-ise and perils of the document, while Francesca Aran Murphy (Catho-lic) engages critically with George Lindbeck's analysis of the document.

The next two essays explore Unitatis Redintegratio: Hans Boersma (Prot-estant) asks whether the ecumenical intention of the document is im-paired by its insistence that the unity of the Church is already present in the Catholic Church, and Reinhard Hutter (Catholic) systematically addresses Barth's questions regarding the document.

The noted ecumen-ist and Catholic theologian Richard Schenk brings the volume to a close by reflecting on "true and false ecumenism" in the post-conciliar period.