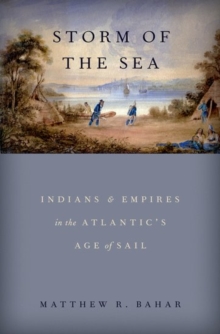 Storm of the Sea : Indians and Empires in the Atlantic's Age of Sail Hardback

From their earliest encounters with seaborne strangers from the east in the sixteenth century to the end of the Seven Years' War in 1763, scattered bands of Native hunter-gatherers across northeastern North America came together to undertake an immense political project.

Their campaign of sea and shore, emboldened by a revolutionary technology, brought wealth, honor, and power to their confederacy while alienating colonial neighbors and thwarting English and Frenchimperialism.

By the Atlantic's Age of Sail, the People of the Dawn were mobilizing it to achieve a Native dominion governed by its sovereign masters and enriched by its profitable and compliant tributaries.