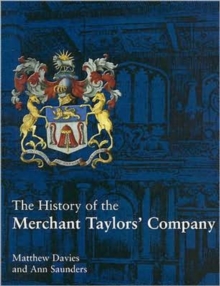 The History of the Merchant Taylors' Company Hardback

by Matthew (University of Newcastle Upon Tyne, UK) Davies

One of the 'Great Twelve' livery companies of the City of London, the Merchant Taylors' Company has been in existence for some seven hundred years.

This new history will chart the remarkable story of the Company and its members from its origins until the 1950s, encompassing the lives and achievements of men such as Sir Thomas White (founder of St John's College, Oxford) and the celebrated chronicler, John Stow, as well as the roles played by the Company in the City and beyond in different periods.

As well as looking in detail at the internal life of the Company, the book will also focus on a number of important themes in the wider history of London.

These include trade and industry, apprenticeship, the impact of religious change, the foundation of schools and other charities, and the government and politics of the City.

In doing so, the book will contribute to an understanding of the aims and activities of the livery companies over the centuries, their ability to adapt to changing circumstances and their relevance in a modern world far removed from that in which they were first established. The History of the Merchant Taylors' Company will appeal to a wide range of people interested in the history of London.

It is fully illustrated with more than seventy-five black and white and thirty colour illustrations.

It is attractively bound in cloth with a full colour dust jacket and matching cloth slipcase.