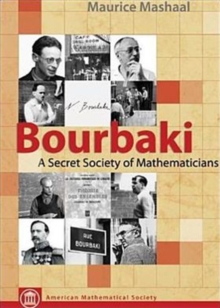 The name Bourbaki is known to every mathematician. Many also know something of the origins of Bourbaki, yet few know the full story.

In 1935, a small group of young mathematicians in France decided to write a fundamental treatise on analysis to replace the standard texts of the time.

They ended up writing the most influential and sweeping mathematical treatise of the twentieth century, ""Les elements de mathematique"".

Maurice Mashaal lifts the veil from this secret society, showing us how heated debates, schoolboy humor, and the devotion and hard work of the members produced the ten books that took them over sixty years to write.The book has many first-hand accounts of the origins of Bourbaki, their meetings, their seminars, and the members themselves.

He also discusses the lasting influence that Bourbaki has had on mathematics, through both the Elements and the Seminaires.

The book is illustrated with numerous remarkable photographs.