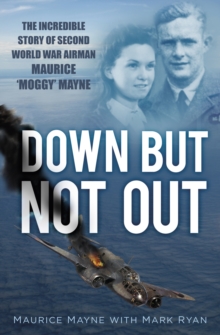 Down but Not Out : The Incredible Story of Second World War Airman Maurice 'Moggy' Mayne Hardback

Maurice `Moggy' Mayne was a cricket-loving air gunner in the Second World War, with a pretty girlfriend back home in rural England.

His turret was in a Bristol Beaufort and his pilot had to fly with almost suicidal bravery at giant German warships before releasing the torpedo.

No wonder Moggy's first pilot cracked up and his second liked to drink.

When he was shot down, Moggy miraculously survived - unlike his best friend Stan. Moggy was sent to Stalag Luft VIIIB, an infamous German POW camp near the Polish border, where he was badly treated.

Instead, as the war neared its end, he had to face the horrors of the `long march' west - and he felt his life slipping away.

Would he ever see his Sylvia again?