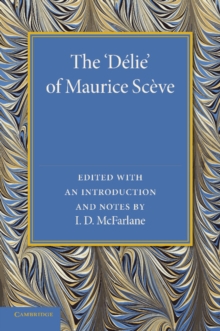 Edited by I. D. McFarlane

The poems are presented in French, with an extensive introduction and detailed textual notes in English.

Textual analysis focuses more on 'the mechanism of the individual poem, so that sources and contemporary habits of rhetoric are considered in the first place as elements of the poetic effect'.

This book will be of value to anyone with an interest in French poetry and Renaissance literature.