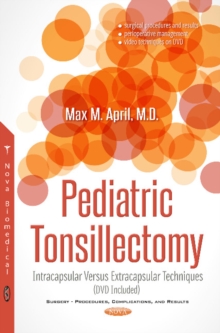 Tonsillectomy is one of the most common procedures that otolaryngologists perform.

Early in residency, most trainees are heavily influenced by their instructors in tonsillectomy technique and rarely revisit these procedures later in training.

In practice, their surgical technique reflects these early experiences.

Opinions regarding tonsillectomy are often difficult to change, possibly because of this early exposure.

He questioned why otolaryngologists perform traditional extracapsular tonsillectomy (which was designed for infectious diseases) for children with obstructive symptomatology.

First, it is ridiculed. Second, it is violently opposed. Third, it is accepted as being self-evident. Intracapsular tonsillectomy is a prime example of this acceptance process.

When Kotai first described it, there were very few otolaryngologists who embraced this procedure.

Over time, much data has been collected, and this procedure has gained increasing acceptance.

This textbook was undertaken with several ideas in mind.

It reviews the last 16 years of information regarding differences in the surgical techniques.

Concepts and data supporting the use of the procedures are presented.

Secondly, this text will serve as a surgical atlas for those in the beginning of training, those that have mastered many techniques but may have not had exposure to all options, and those that are looking for even more advanced surgical maneuvers that may enhance their results.

This will be a new type of surgical atlas, one using different colors to depict basic and advanced techniques. Each photograph demonstrates specific points of the procedures, with basic portions designated in green and more advanced techniques depicted in blue.

Full length videos of each technique are also included.

The European Experience of Tonsillotomy is not included in this text because there are no centers in the United States experienced with that procedure.

Tonsillotomy is described as removing the tonsil tissue to the level of the anterior tonsillar pillar with a CO2 laser.

It does not approach the depth of dissection of intracapsular tonsillectomy and therefore provides difficulty with comparisons.

The text begins with Dr. Peter Koltai's description of how he developed the concept of intracapsular tonsillectomy.

Chapter One, Powered Adenoidectomy, introduces many concepts that are also common to tonsillectomy. Chapters Two - Four describe the authors technique of intracapsular tonsillectomy (IT), as well as those of Dr. Robert Ward (New York University), and Dr. John Bent (Albert Einstein Medical College). In Chapter Five, Drs. Goldstein and Gitman from SUNY Downstate review extracapsular tonsillectomy (ET) and include their interpretation of IT. In Chapter Six, Dr. Nina Shapiro, with Sophie Shay from University of California, Los Angeles, reviews her extensive experience with coblation assisted tonsillectomy, both for extracapsular and intracapsular techniques. In Chapter Seven, Drs. Rubinstein and Derkay from Eastern Virginia University discuss the results of both IT and ET from the perspective of treatment of sleep disturbances and compare the complication rates published over the past 16 years.

In Chaper Eight, the recent controversy of post-tonsillectomy pain treatment is presented with recommendations from Drs.

David Tunkel and Grace Tan of Johns Hopkins University School of Medicine. Finally, in the last chapter, conclusions are drawn and questions for the future are presented.