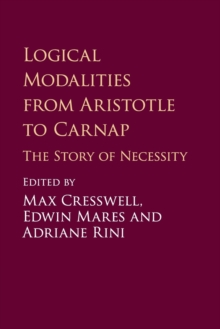 Logical Modalities from Aristotle to Carnap : The Story of Necessity Paperback / softback

Interest in the metaphysics and logic of possible worlds goes back at least as far as Aristotle, but few books address the history of these important concepts.

This volume offers new essays on the theories about the logical modalities (necessity and possibility) held by leading philosophers from Aristotle in ancient Greece to Rudolf Carnap in the twentieth century.

The story begins with an illuminating discussion of Aristotle's views on the connection between logic and metaphysics, continues through the Stoic and mediaeval (including Arabic) traditions, and then moves to the early modern period with particular attention to Locke and Leibniz.

The views of Kant, Peirce, C. I. Lewis and Carnap complete the volume. Many of the essays illuminate the connection between the historical figures studied, and recent or current work in the philosophy of modality.

The result is a rich and wide-ranging picture of the history of the logical modalities.