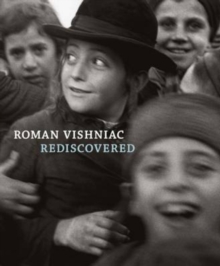 Drawn from the International Center of Photography's vast holdings of work by Roman Vishniac (1897-1990), this expansive volume offers a new and profound consideration of this key modernist photographer.

These include newly discovered images of prewar Berlin, rare film footage from rural Jewish communities in Carpathian Ruthenia, documentation of postwar Displaced Persons' camps and vivid coverage of Jewish life in America in the 1940s and '50s.

Essays by world-renowned scholars of photography, Jewish history and culture address these new-found images and consider them in the context of modernist tendencies in Berlin in the 1920s and '30s; the rise of Nazi power in Germany and Eastern Europe; the uses of social documentary photography for relief organisations; the experiences of exile, displacement and assimilation; and the impact of Vishniac's pioneering scientific research in colour photomicroscopy in the 1950s and '60s.

This first retrospective monograph on Roman Vishniac offers many new perspectives on the work and career of this important photographer, positioning him as one of the great modernists and social documentary photographers of the last century.

Published in association with the International Center of Photography.