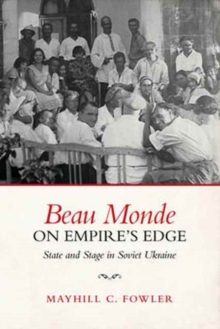 In Beau Monde on Empire's Edge, Mayhill C. Fowler tells the story of the rise and fall of a group of men who created culture both Soviet and Ukrainian.

This collective biography showcases new aspects of the politics of cultural production in the Soviet Union by focusing on theater and on the multi-ethnic borderlands.

Unlike their contemporaries in Moscow or Leningrad, these artists from the regions have been all but forgotten despite the quality of their art.

Beau Monde restores the periphery to the center of Soviet culture.

Sources in Russian, Ukrainian, Polish, and Yiddish highlight the important multi-ethnic context and the challenges inherent in constructing Ukrainian culture in a place of Ukrainians, Russians, Poles, and Jews.

Beau Monde on Empire's Edge traces the growing overlap between the arts and the state in the early Soviet years, and explains the intertwining of politics and culture in the region today.