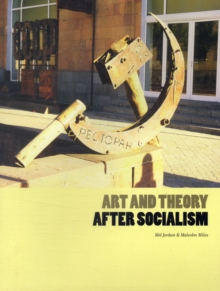 Contemporary visual culture, art, theory and criticism shifted after the end of the Cold War, so that cultural production in both the East and the West underwent radical new challenges. "Art and Theory After Socialism" considers the new critical insights that are produced in the collisions of art theory from the ex-East and ex-West.

The collected essays assert that dreams promised by consumerism and capitalism have not been delivered in the East, and that the West is not a zone of liberation as it is increasingly drawn into global conflict as well as media presentation of a high-risk society.Academics, artists and critics focus on specific practices and broader contexts for cultural production, highlighting the work of artists in the former Soviet and East European bloc and in the West.

The collection reveals that some practices have not changed, and that in a world of globalized consumption, art and theory are not as liberated as perhaps supposed.

New practices are discussed: collaborative efforts by groups of artists, and the emergence of dissident art that subverts and challenges the institutional structures of the art world. "Art and Theory After Socialism" is a unique re-investigation of the overlap of art and everyday life in a post-Cold War world.

It draws together perspectives from Eastern and Western Europe.

It provides a contemporary emphasis. It links writers well established in their fields to new voices.