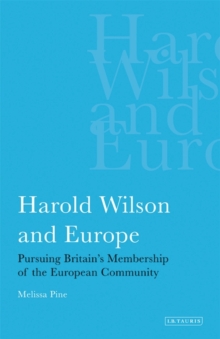 The second British application to join the European Communities (EC) was made during Harold Wilson's second Labour government.

It ended in failure with French President Charles de Gaulle's veto in November 1967. "Harold Wilson and Europe" traces the development of Britain's policy towards the EC from the veto to the end of Wilson's government in June 1970.

Based on detailed archival research, Melissa Pine traces Wilson's efforts to forge stronger bonds with EC states while managing both a cabinet divided on the issue, and a complex broader foreign policy.

This fascinating insight into the Wilson government reveals Wilson's early diplomacy was vital for the Conservatives' successful negotiation of British entry into the EC by 1973.

Pine concludes that Wilson was personally committed to securing membership, and that he and key members of his government played a crucial role in securing the UK's eventual membership of the EC.