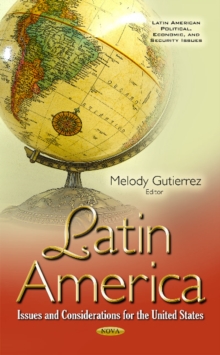 Geographic proximity has ensured strong linkages between the United States and the Latin American and Caribbean region, with diverse U.S. interests, including economic, political, and security concerns.

There was substantial continuity in U.S. policy toward the region during the first six years of the Obama Administration, which pursued some of the same basic policy approaches as the Bush Administration.

Nevertheless, the Obama Administration made several significant policy changes, including an overall emphasis on partnership and shared responsibility.

Moreover, in December 2014, President Obama unveiled a new policy approach toward Cuba that broke with the long-standing U.S. sanctions-based policy and moved toward a policy of engagement.

This book provides an overview of U.S. policy toward Latin America and the Caribbean.