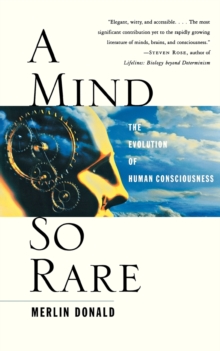 A Mind So Rare : The Evolution of Human Consciousness Paperback / softback

In this masterful rebuttal to the prevailing neuroscientific arguments that seek to explain away consciousness, Merlin Donald presents "a sophisticated conception of a multilayered consciousness drawing much of its power from its cultural matrix" (Booklist).

Donald makes "a persuasive case...for consciousness as the central player in the drama of mind" (Peter Dodwell), as he details the forces, both cultural and neuronal, that power our distinctively human modes of awareness.

He proposes that the human mind is a hybrid product, interweaving a super-complex form of matter (the brain) with an invisible symbolic web (culture) to form a "distributed" cognitive network.

This hybrid mind, he argues, is our main evolutionary advantage, for it allowed humanity as a species to break free of the limitations of the mammalian brain. "Donald transcends the simplistic claims of Evolutionary Psychology,...offering a true Darwinian perspective on the evolution of consciousness."-Philip Lieberman 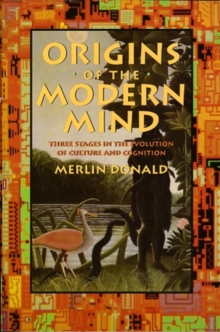 Origins of the Modern Mind