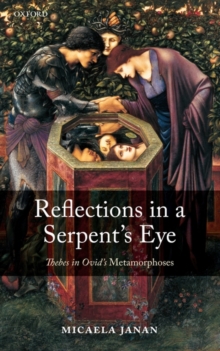 Reflections in a Serpent's Eye : Thebes in Ovid's Metamorphoses Hardback

Ovid's extraordinary story of Thebes' founding and bloody unravelling spans two books of his epic poem, the Metamorphoses. His bizarre refractions of the well-ordered community engage Ovid's own Rome and the mythohistory of the Eternal City's origins, most particularly as framed in Vergil's Aeneid (Vergil's poem attained nonpareil status as the Latin epic soon after publication). The Aeneid has regularly been read as persuasivelyformulating how and why Rome will stride forward into history, into manifest destiny, and into `empire without end'.

The Metamorphoses' strangely fantastical surface reflects what is already inherently perverse in that master-narrative, disclosing the narrative's internal contradictions. Ovid rigorously and sceptically not onlyinterrogates the existing (Roman) political order, claimed as lasting truth, but also the very possibility of organizing any polity into a harmonious, organically unified, lasting institution.