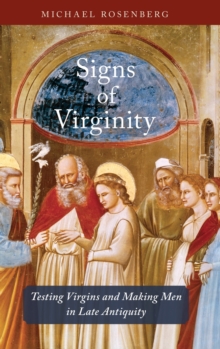 Although the theme of bloodied nuptial sheets seems pervasive in western culture, its association with female virginity is uniquely tied to a brief passage in the book of Deuteronomy detailing the procedure for verifying a young woman's purity and seldom, if ever, appears outside of non-Abrahamic traditions.

In Signs of Virginity, Michael Rosenberg examines the history of virginity testing in Judaism and early Christianity, and the relationship of thesetests to a culture that encourages male sexual violence.

Deuteronomy's violent vision of virginity has held sway in Jewish and Christian circles more or less ever since, but Rosenberg points to two authors-the rabbinic collective that produced the Babylonian Talmud and Augustine of Hippo-who, even as they perpetuate patriarchal assumptions about female virginity, nonetheless attempt to subvert the emphasis on sexual dominance bequeathed to them by Deuteronomy.

Unlike the authors of earlier Rabbinic and Christian texts, who modified butfundamentally maintained and even extended the Deuteronomic ideal, the Babylonian Talmud and Augustine both construct alternative models of female virginity that, if taken seriously, would utterly reverse cultural ideals of masculinity.

Indeed this vision of masculinity as fundamentally gentle, rather thancharacterized by brutal and violent sexual behavior, fits into a broader idealization of masculinity propagated by both authors, who reject what Augustine called a "lust for dominance" as a masculine ideal.