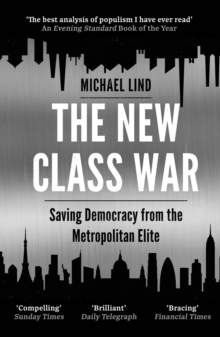 An Evening Standard's Book of the Year'A tour de force.' David GoodhartAll over the West, party systems have shattered and governments have been thrown into turmoil.

The embattled establishment claims that these populist insurgencies seek to overthrow liberal democracy.

The truth is no less alarming but is more complex: Western democracies are being torn apart by a new class war. In this controversial and groundbreaking analysis, Michael Lind, one of America's leading thinkers, debunks the idea that the insurgencies are primarily the result of bigotry and reveals the real battle lines.

He traces how the breakdown of class compromises has left large populations in Western democracies politically adrift.

We live in a globalized world that benefits elites in high income 'hubs' while suppressing the economic and social interests of those in more traditional lower-wage 'heartlands'. A bold framework for understanding the world, The New Class War argues that only a fresh class settlement can avert a never-ending cycle of clashes between oligarchs and populists - and save democracy.