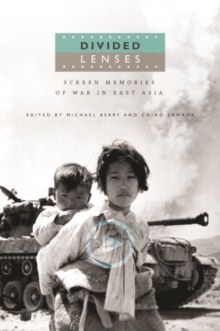 Divided Lenses: Screen Memories of War in East Asia is the first attempt to explore how the tumultuous years between 1931 and 1953 have been recreated and renegotiated in cinema.

This period saw traumatic conflicts such as the Sino-Japanese War, the Pacific War, and the Korean War, and pivotal events such as the Rape of Nanjing, Pearl Harbor, the Battle of Iwo Jima, and the bombings of Hiroshima and Nagasaki, all of which left a lasting imprint on East Asia and the world.

By bringing together a variety of specialists in the cinemas of East Asia and offering divergent yet complementary perspectives, the book explores how the legacies of war have been reimagined through the lens of film. This turbulent era opened with the Mukden Incident of 1931, which signaled a new page in Japanese militaristic aggression in East Asia, and culminated with the Korean War (1950-1953), a protracted conflict that broke out in the wake of Japan's post-World War II withdrawal from Korea.

Divided Lenses explores the ways in which events of the intervening decades have continued to shape politics and popular culture throughout East Asia and the world.

The essays in part I examine historical trends at work in various ""national"" cinemas, including China, Taiwan, Japan, Korea, and the United States.

Those in part 2 focus on specific themes present in the cinema portraying this period-such as comfort women in Chinese film, the Nanjing Massacre, or nationalism-and how they have been depicted or renegotiated in contemporary films.

Of particular interest are contributions drawing from other forms of screen culture, such as television and video games. Divided Lenses builds on the growing interest in East Asian cinema by examining how these historic conflicts have been imagined, framed, and revisited through the lens of cinema and screen culture.

It will interest later generations living in the shadow of these events, as well as students and scholars in the fields of cinema studies, cultural studies, cold war studies, and World War II history.