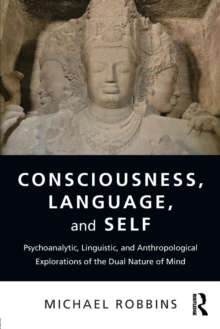 Consciousness, Language, and Self : Psychoanalytic, Linguistic, and Anthropological Explorations of the Dual Nature of Mind Paperback / softback

Consciousness, Language, and Self proposes that the human self is innately bilingual.

The "mother tongue," the language of primordial consciousness, begins in utero and our second language, reflective symbolic thought, begins in infancy.

Michael Robbins describes the respective roles the two conscious mental processes and their particular use of language play in the course of normal and pathological development, as well as the role the language of primordial consciousness plays in adult life in such phenomena as dreaming, infant-caregiver attachment, creativity, belief systems and their effects on social and political life, cultural differences, and psychosis.

Five original essays, written by the author's current and former patients, describe what they learned about their aberrant uses of language and their origins. This book sheds new light on several controversies that have been limited by the incorrect assumption that reflective representational thought and its language is the only conscious mental state.

Consciousness, Language, and Self will be of great value to psychoanalysts, as well as students and scholars of linguistics, cognitive philosophy and cultural anthropology.