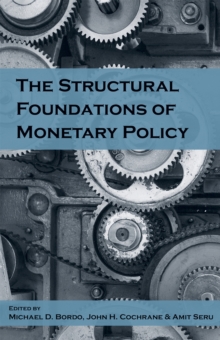 In The Structural Foundations of Monetary Policy , Michael D.

They voice concern over the Fed's independence, governance, and ability to withstand future shocks and analyze the effects of its monetary policies and growing balance sheet in the wake of the 2008 financial crisis.

The authors ask a range of questions that get to the heart of twenty-first-century monetary policy.

What should the role of the Fed be? Which policies and strategies will mitigate the risks of the next crisis and at the same time spur innovation and job creation?

What does the emergence of crypto-currencies such as Bitcoin mean for competition and stability?

How can the Fed defend itself against exploitation and politicization?

Finally they propose reforms to ensure that the Fed will remain independent, stable, strong, and resilient in an unpredictable world.