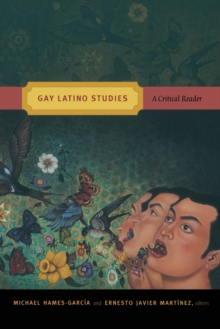 The authors of the essays in this unique collection explore the lives and cultural contributions of gay Latino men in the United States, while also analyzing the political and theoretical stakes of gay Latino studies.

Designed to stimulate dialogue, the collection pairs each essay with a critical response by a prominent Latino/a or Chicana/o scholar.

Terms such as gay, identity, queer, and visibility are contested throughout the volume; the significance of these debates is often brought to the fore in the commentaries.

The essays in Gay Latino Studies complement and overlap with the groundbreaking work of lesbians of color and critical race theorists, as well as queer theorists and gay and lesbian studies scholars.

Taken together, they offer much-needed insight into the lives and perspectives of gay, bisexual, and queer Latinos, and they renew attention to the politics of identity and coalition.Contributors.