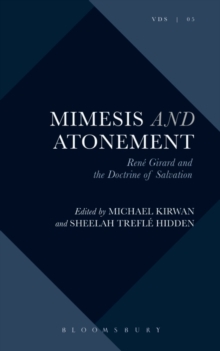 Mimesis and Atonement : Rene Girard and the Doctrine of Salvation Paperback / softback

Part of the Violence, Desire, and the Sacred series

How are we to best understand the statement of faith that Jesus Christ lived, died and rose again 'for us and for salvation?' This question has animated Christian thought for two millennia: it has also bitterly divided believers, not least in Reformation and post-Reformation disputes about atonement, justification, sanctification and sacrifice.

Rene Girard's Violence and the Sacred (1972) made startling connections between religion, violence and culture.

His work has enlivened the theological and philosophical debate once again, especially the question of whether and how we are to understand Christ's death as a 'sacrifice'.

Mimesis and Atonement brings together philosophers from Catholic, Evangelical, Orthodox, and Jewish backgrounds to examine the continued significance of Girard's work.

They do so in the light of new developments, such as the controversial 'new scholarship' on Paul.